Hey, my name is Gemma. I am a  student at the University of Worcester, studying Physical Education and Outdoor Education.

Why Physical Education and Outdoor Education?

As an aspiring Physical Education (PE) teacher, I always knew that I wanted to gain a degree in this field.

However, I was not aware until I attended an Open Day at the University that this course could be combined with Outdoor Education (OE) and I thought it was my lucky day!

I realised that this partnership would give me an “edge” when applying for teaching positions after I graduate as PE teachers with the addition of OE experience are highly sought-after by Education Authorities.

Plus, I thought that being able to study two of my favourite subjects alongside each other, could not make this course any more perfect for me. 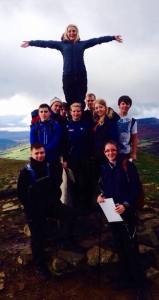 Worcester is a lovely city. It isn’t like your stereotypical city to say the least. There are wide open green spaces throughout and it is just on the doorstep to the Malvern hills, which being a lover of the outdoors, suits me down to the ground.

There are all of the usual amenities of a City too. A train station where you can jump on a train and be in Birmingham within the hour, loads of high street shops and not one, but two McDonalds in walking distance – it is important! 🙂

The city has a great sporting repertoire and the majority of teams play to a very high standard –  Worcester Wolves Basketball team (whom you can go and see for a discounted price if you’re a student at Worcester) and the Worcester Warriors Rugby Club.

I personally like the way in which the Uni is not as big as others because you feel like a person rather than a number and you can really feel at home!

My First Week at Worcester

During the first week at Worcester, all of my initial thoughts about the Uni and the course were confirmed. It was Great! Initially, I was apprehensive, as you could only expect from venturing into the unknown and meeting so many new people.

However, by the end of the week, I had already made some really good friends, who I can now do all sorts of adventurous activities with; whether it be climbing up Snowdon or seeing who can eat a Kebab at the end of a long night without getting it all over them.

Things You Should Know Before Joining this Course at Worcester