On the 9th of August myself and four of my fellow student paramedics returned from Volunteering in the refugee camps in France. We are part of an emergency health care team called FAST (First Aid Support Team), who provide emergency health care treatment to refugees, and are made up solely of medical volunteers. The purpose of this organisation is too ensure the refugees are provided with their basic human rights and are treated with the respect and dignity they deserve. All the refugees within these camps were forced out of their homes and countries by persecution, violence and war.

Our team out in France was made up of a variety of medical professionals, such as Doctors, Nurses, a Paediatric intensive care nurse and students. We were able to identify everyone’s strongest skill and allocate them to the appropriate camp or patient each day.

During our time in France we were sent to camps in Calais, Dunkirk and Brussels, where we faced many barriers. The main hurdle we faced was the language barrier, which we managed to overcome by drawing upon the techniques we use out on our ambulance placements. We were also able to learn basic words of the refugee’s languages to assist us.

A normal day in the field required us too travel to as many of the camps as possible. When arriving at each of the camps we would set up the field hospital and set up areas for wound and burn care, infectious diseases, and medical triage. When treating patients we used many skills, such as wound cleaning, bandaging, dentistry care, ENT care, pain control, dressing sores, burn care, treatments for rashes, treating infectious diseases, and infected bites. We also had too set up a separate Paediatric part to triage and treat the sheer amount of children who attended the field hospital.

After treating the patients and being able have a discussion with them about their circumstances we realised there was also a huge emotional impact. Hearing stories about how they were driven from their homes and forced to travel dangerously too France in the hope of finding safety only too be exposed to the brutality of the French police and the dangers of crossing the borders was harrowing. We were treating refugees (including children) for severely infected wounds and burns caused by attacks from police, attempting to jump onto Lorries, trying to swim across the channel, and climbing over barbed wire to find a safe place to sleep. Due to the trauma they have faced, many of the refugees have been left with major anxiety issues, many of these being children who have witnessed unspeakable events, meaning they become very sleep deprived and scared. 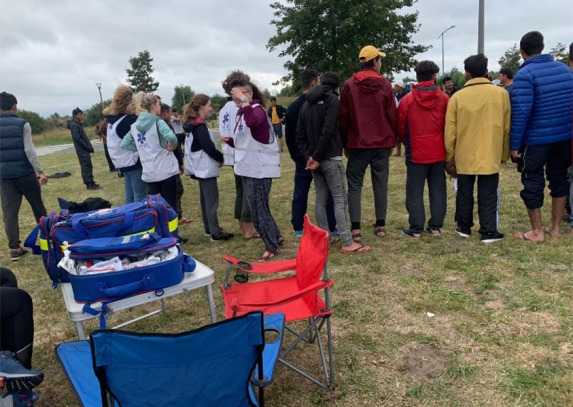 Although the majority of what we witnessed and experienced was extremely sad, we were all taken aback by how thankful and happy the refugees were to see us every day. FAST provide a symbol of safety for these inspiring refugees who just want a safe and happy life for themselves and their children. We have all had our eyes opened in different ways, coming away from the trip heartbroken but thankful. We have developed new skills and strengthened existing skills, benefiting our future paramedic practice. All four of us will be returning to France in December to volunteer again, as the winter months are the most treacherous for refugees; and we will be organising a team of student paramedics and qualified paramedics too go over and help.

The students that attended the camp in Calais are: Lucy Foulkes, 21. Grace Millington, 24. Georgia Poulton, 20. Casey Thacker, 20 and are all students on the BSc Paramedic Science (Hons) course.